Does the metalwork need to come out?

This is a very common question to ask. Plates, screws, wires and metal rods are often used to hold bones together. Once inserted it is a race between the bones healing and the metal breaking, usually the bone wins. 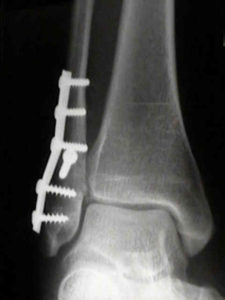 There are very few absolute reasons to remove metal work.  In general metal is only removed if it is causing or has the potential to cause harm. In all aspects of orthopaedics we are often weighing up the pro’s and cons of doing one thing or another.

In the past there where concerns about the long term effect of metal on the body, however we now know there is no increased risk of tumour or infection around static metal work (i.e. plates, screws etc not metal on metal hip replacements).

Any operation carries with it the potential for complications, therefore you want to be sure the risks of metal work removal justifies the risks.  Therefore each case should be judged on its own merits and you should discuss this with your surgeon.

Sometime it is recommened to remove metalwork, for example tension band wiring of the elbow is often problematic and tender.  It is also easily removed once the fracture has healed and surgery has a very low complication rate.

Plates in the forearm of an adult are very seldom symptomatic and are associated with an up to 20% complication rate when removal is attempted.  In high risk individuals who undertake high risk activities on a daily basis, metal might be removed to prevent a break around the metalwork.   In these patients the metal ends becomes a relative stress riser and as such if the limb is subjected to a large stress, the bone often breaks at the end of the metal.  If this occurs treatment is more tricky particularly if there is only a small piece of bone left above or below the metalwork.
This was a real problem in the past, with modern surgical techniques and modern implants it is not as much of a problem. 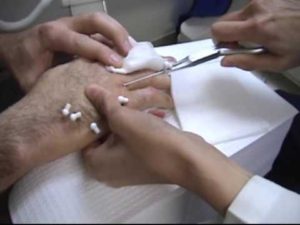 K- wires (Kirschner wires)
K-wires are stainless steel wires of varying thickness, normally 1-2 mm thick.
They are often used for temporary fixation of fractures, most commonly around the wrist. They are often left proud of the skin and as such can be pulled out in clinic.
K-wires that need to be in place for more than 6 weeks may be buried under the skin, requiring surgery to open the skin and allow removal.

Hook Plate
The hook plate is inserted into the shoulder to hold the lateral clavicle in a good position. It is used in some fractures of the lateral clavicle and some dislocations of the Acromioclavicular join (ACJ).
The hook plate is generally considered a temporary device. It is only not removed in exceptional circumstances.
The reason the hook plate is removed, is because it may cause symptoms of shoulder impingement and problems with the shoulder rotator cuff.
With time it may also erode the under surface of the acromion, weakening it and predisposing the acromion to fracture.

Intramedullary Nails
In general intramedullary nails are not removed unless you undertake risky activities on a daily basis.
An intramedullary nail is stiffer than normal bone and as such patients often get a little aching and discomfort when stressing the limb.
Removal may improve this but not totally remove the aching of a previously broken bone.
In patients who have had a tibial nail, pain under the knee cap in the front of the knee is common.
This may be improved in 50%of cases with removal of the nail, but complete resolution of symptoms is not guaranteed.
A relative indication might be the future need for a joint replacement.

All surgery is associated with varied risks and potential complications.
The general risks of metalwork removal include: